Director of Small World Productions Justyn Jones took part in a Bafta masterclass yesterday at the University of South Wales , Atrium Cinema, Cardiff, for the film ‘Jamie Baulch- Looking for My Birth Mum.‘

Justyn,who produced-directed the film for Avanti Media joined, Jamie and development producer/AP Connie Fisher in answering questions from students after a a screening of the film which won Bafta Cymru Best Single Documentary 2015.

It was revealed by Jamie that following the last film, which went out on BBC 1 UK network  after two screenings  on BBC Wales, several people told Jamie that they had adopted children purely as a consequence of watching the film.

“That just shows that films like this can make a real difference,” said Jamie, who is now in the middle of production of a sequel which will hopefully be screened later this year. 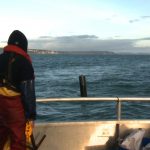