Thousands of cetaceans, dolphins-whales and propoises, are killed eached in fishing nets in the North East Atlantic.Some wash up dead on the beaches of Britian and France showing the telltale wounds of having struggled desperately to set themselves free.

’Death Beneath Waves’ reports on efforts by campaigners and governments to reduce the level of by catch and the effect on the populations. The film also covers the issue of bottlenose dolphin attack on porpoises. 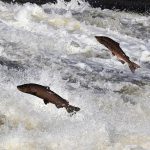