This films follows the lives of children in Angola, Kosovo, and Columbia who have been forced to flee their homes because of war and violence.

The film shows how these children try to survive by living on the streets, the psychological and emotional damage to their lives, and the efforts to help them. 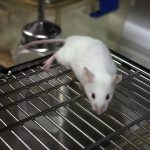